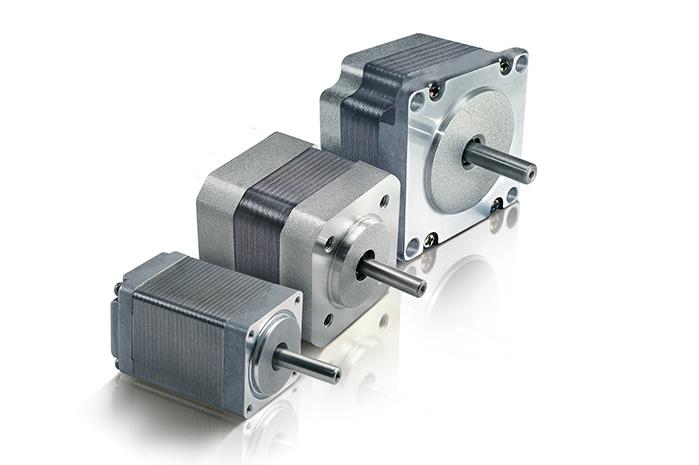 To accurately provide load calculations for your next design, we’ve provided all the necessary formulas and concerns you might have. The following information presents important tips for anyone looking to incorporate step motors into their design. Below we’ve looked at standard load calculations, understanding speed/torque characteristics, some concerns when calculating acceleration torque, and information about the reduction of vibration and noise.

The following equation is the one most commonly used when performing torque load (Tf) calculations.

The following equations are the most commonly used when performing inertia load (TJ) calculations.

An important aspect of a stepper motor’s output performance has to do with its dynamic torque curve. To better understand this curve, let us go through some key information.

A: The “working frequency point” expresses the step motor’s rotational speed versus its drive pulse rate. The following formula is helpful:
n = q * Hz / (360 * D)
where:

B: The start/stop region is the area in which a step motor can be directly started or stopped.

C: The slewing range, is the area in which the motor cannot be started directly. (It must be started in the start/stop region first and then accelerated into the slew range—in this area, the motor cannot be directly stopped, either or it would lead to losing steps.) The motor must be decelerated back to the start/stop region before it can be stopped.

F: Pull-in Torque is the maximum dynamic torque value that a step motor can load directly at the particular operating frequency point.

G: Pull-out Torque is the maximum dynamic torque value that a step motor can load at the particular operating frequency point when the motor has been started. (Because of the inertia of rotation the Pull- Out Torque is always larger than the Pull-In Torque.)

The torque needed to accelerate the system inertia is often larger than the friction torque of the load. This fact limits how quickly the load can be accelerated.

As shown below, the dynamic torque performance of a step motor is constant at low speeds. Yet, at higher speeds, the torque drops as speed increases—influenced directly by the relationship between the motor inductance and the motor drive voltage. Note the following for a better understanding of these interactions.

A: Accelerated Motion of Straight Line

Note: J is the rotational inertia of the motor rotor plus the load, q is the angle of each step and is equal to the step angle of the step motor when the motor runs at full step.

Facilitating the Reduction of Vibration and Noise

In a no-load condition, step motors may appear to have a vibration or even lose steps when the motor is running at or close to the resonant frequency. There are several known solutions to this condition.

A. Simply be sure that the motor operates outside of this speed range.

B. Consider micro-stepping, which is used to increase a motor’s step resolution. By adopting a micro-step driving method, engineers can divide one step into multiple steps thereby greatly reducing vibration. This is accomplished by controlling the motor’s phase current ratio. Micro-stepping does not increase step accuracy; however, it will allow a motor to run more smoothly and with less noise. When the motor runs in half-step mode the motor torque will be 15% less than running in full-step mode. If the motor is controlled by sine wave current the motor torque will be reduced by 30% if using the same peak current.
C. Finally, you can reduce noise and vibration by incorporating a 0.9° 2 phase step motor or a three-phase step motor.

Multiple Ways to Increase Torque in Your Motor

Engineers continually need to cut overall costs, footprint, and maintenance requirements while continuing to design and build systems that must perform to tighter specifications and higher standards of operation. In talking with stepper motor experts from one company, it appears that a keen knowledge of motor workings is key.

Get to Know Lin Engineering